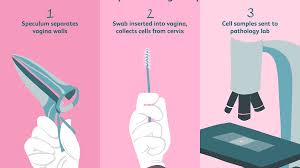 What is a PAP SMEAR ?

Cervical cancer remains a global health problem. But screening smears have reduced mortality by 70% in industrialized countries. It is even estimated that 90% of deaths linked to cervical cancer could be prevented by better screening.

The cervical smear is a screening test that allows cells to be removed from the surface of the cervix.

The cells are examined under a microscope. Depending on the appearance of these cells, we can then assume:

• That the cervix is ​​normal;

• Whether he has an infection, abnormalities which may correspond to pre-cancerous lesions called dysplasias or even SIL (squamous intraepithelial lesions)

• That it evokes early cervical cancer.

Remember that screening targets a population of 17 million women aged 25 to 65. However, only 60% of women aged 20 to 49 in France do screening smears. « If this rate rose to 80%, the incidence of cervical cancer would decrease by 34% » says Dr Jean-Luc Mergui, gynecologist-obstetrician in Paris.

Why do I need a pap smear test?

Cervical cancer is preventable cancer. Unlike other sites in the body, it is possible to detect lesions that could develop into cancer very early on. Taken care of and treated at an early stage of abnormality, it is almost always possible to avoid the development of cancer.

Today, we have sophisticated screening techniques that guarantee patients almost total protection against this cancer. With the exception of rare screening failures, cervical cancer should not be seen in women screened regularly.

Which women should be tested?

All women aged 25 to 65 should be screened for cervical cancer every three years after three normal smears, one year apart.

Because precisely precancerous lesions of the cervix are not accompanied by any symptoms, it is fundamental to understand that to be protected from cervical cancer screening must be practiced at a regular rate.

• The screening test is offered to all women, at least to all those who have had sexual intercourse;

• In young girls whose sexual activity started at an early age, the screening test can under certain conditions be carried out before the age of 20 (under medical indication);

• After menopause, you should continue to do smears whether or not you are taking hormone replacement therapy;

• After a hysterectomy, the pap smear should be continued at a spaced rate.

To carry out this test, it is recommended:

• Avoid the period of periods or undercurrent bleeding;

• Apply creams, gels or tampons two days before the test;

• Also avoid having sex two days before the test.

Finally, in case of vaginal infection, it is necessary to wait a month after the end of the treatment before making the smear.