What is a menopause ? 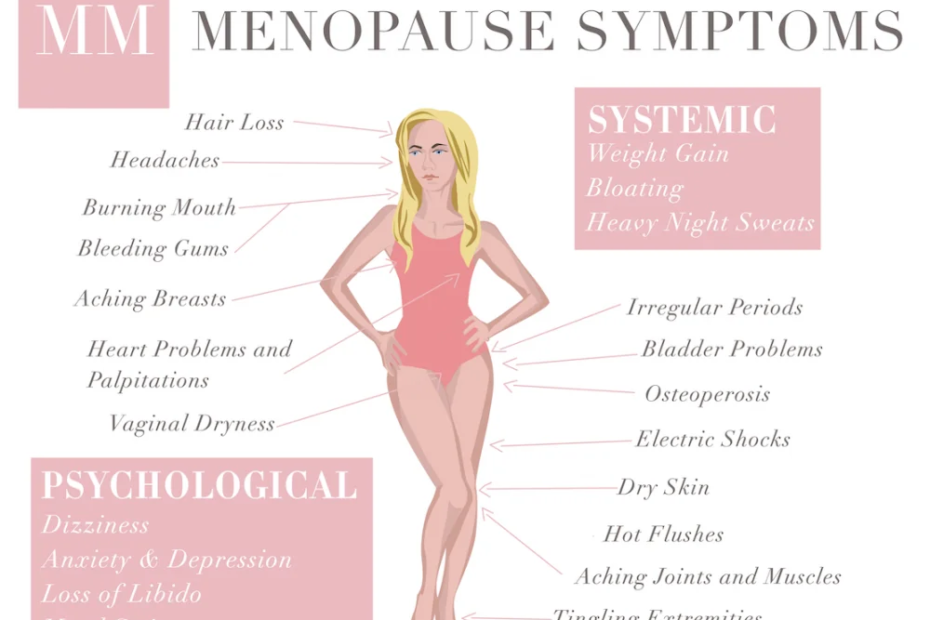 Menopause is a natural phenomenon; it is not an illness. The term menopause etymologically means « cessation of menstruation », and thus designates the period which occurs when the ovaries stop producing the reproductive hormones:

Menopause most often begins around the age of 50. Taking a birth control pill does not change the age at which menopause occurs naturally. This experience, specific to each, is lived in a very different way according to women, countries and cultures.

Menopause does not come suddenly. It is preceded by a more or less long period called perimenopause. The latter lasts an average of four years and continues during the 12 months following the last period.

This period corresponds to the decrease in the production of female sex hormones. During this phase, women know:

• cycle disorders: too long, too short, too heavy periods, too long…;

If these manifestations do not pose major problems, no treatment is necessary. On the other hand if the disorders really handicap the quality of life of the patient, you must speak about it with your doctor. With him, the possibility of taking charge can be addressed.

At what age does menopause begin?

In France, menopause occurs on average at 51 years of age. But from one woman to another, this stage can occur naturally between 40 and 55 years of age. It is generally advanced a year or two in heavy smokers. In addition, certain genetic factors can play a role. The date of menopause is often the same for a mother and daughter.

How does menopause affect me?

Menopause can be accompanied by more or less difficult disorders to support and favor the development of osteoporosis or cardiovascular diseases. Symptoms of menopause:

• vary from woman to woman

• In the same woman, they vary over time.

They can be of different intensity and not be felt in the same way by each.

What are the so-called « climacteric » disorders of menopause?

These disorders are nonexistent or very moderate in one in two women. When they arise, they can be painful and difficult to bear. Their duration can vary from a few months to several years.

This is the most common symptom due to the cessation of estrogen production by the ovaries. Hot flashes are manifested by a feeling of heat sometimes accompanied by redness of the skin, which begins in the face and neck, then extends to the chest and shoulders, and eventually becomes generalized. In some women, hot flashes are accompanied by intense sweating. They can occur during the day or during the night. They are harmless but can be very bothersome.

The estrogen deficiency occurring at the time of menopause can make the vaginal wall thinner, drier and less « elastic ». Sex can become uncomfortable.

The control of the bladder can be less good, which can cause small urinary leaks, especially during efforts (sneezing, giggles…). It is important to take this incontinence problem into account as soon as it appears so that it does not get worse.

The structure and texture of the skin are influenced by sex hormones and by more general biological changes linked to aging. After menopause, the skin becomes thinner and more fragile.

Often, at the time of menopause, women gain weight and find it more difficult than before to lose these pounds.

Weight gain is not directly related to hormonal changes in menopause. However, menopause causes a change in the distribution of fats: they now accumulate more frequently in the belly than in the thighs and buttocks.

At the time of menopause, other disorders can appear:

Some women can sometimes have a tendency to depression. There is no formal evidence that menopause in itself can cause depression; this disease does not seem to be more frequent at this time of life than at other times.

What can be the consequences of menopause on the mineralization of my skeleton?

After menopause, bone loss accelerates because the body’s ability to produce bone tissue decreases. The bones become more fragile, to the point that fractures can occur following a slight trauma, particularly in the wrist and spine (vertebral compression), and later in the neck of the femur. After 70 years, a fracture of the femoral neck occurs in one in six women.

Osteoporosis does not affect all women. However, this risk of osteoporosis increases if:

What for the cardiovascular at menopause?

What are the risks and benefits of hormone replacement therapy (HRT)?

The benefits of HRT are twofold. They mainly concern:

Like all medicines, HRT has side effects. Two Anglo-Saxon studies have highlighted an increased risk of breast cancer and cardiovascular disease. In light of these recent results, the indications for HRT have been reassessed and the prescriptions are now very personalized. The French National Authority for Health recalls, however, that the known risks of these treatments are confirmed and recommends treatment at the most adjusted doses and as short as possible, reassessed at least each year.

Who can benefit from HRT?

The decision to start HRT should be made in consultation with your doctor depending on your state of health and your wishes.

IF YOU HAVE INCONVENIENT « CLIMATE » SYMPTOMS

In case of hot flashes or other annoying symptoms (that is to say which significantly disturb the quality of life), HRT can be instituted, if you wish, for the shortest possible time. After clear information on the risks, your doctor will reassess the treatment regularly (at least once a year) with the possibility of a temporary suspension of the treatment, in order to control the persistence of the symptoms and their severity.

IF YOU HAVE RISK FACTORS FOR OSTEOPOROSIS

HRT should not be introduced systematically. There are other ways to prevent osteoporosis, especially a healthy lifestyle, a diet rich in calcium, and a sufficient supply of vitamin D. Only your doctor can decide on the interest of prescribing HRT, if you have a high risk of osteoporosis and therefore of fracture and provided that you have not tolerated other treatments indicated in the prevention of osteoporosis.

If your symptoms are not bothersome or risk factors for osteoporosis, it is not recommended to take HRT, as the balance between the expected benefits and the risks involved is not favorable.